We Are Happy to Service All Carlynda Jewelers Clients

Garnet, the birthstone for January, signifies eternal friendship and trust and is the perfect gift for a friend. Garnet, derived from the word granatum, means seed, and is called so because of the gemstone’s resemblance to a pomegranate seed. References to the gemstone dates back to 3100 B.C., when the Egyptians used garnets as inlays jewelry. Garnet is the name of a group of minerals that comes in a rainbow of colors, from the deep red of the pyrope garnet to the vibrant green of tsavorites. Today, the most important sources for garnet are Africa, Sri Lanka, and India. 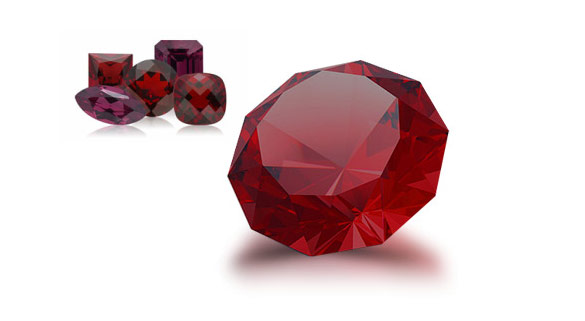 The name aquamarine is derived from the Latin word aqua, meaning water, and marina, meaning the sea. This gemstone was believed to protect sailors, as well as to guarantee a safe voyage. The serene color of aquamarine is said to cool the temper, allowing the wearer to remain calm and levelheaded. Its pale, cool color beautifully complements spring and summer wardrobes. Aquamarine is most often light in tone and ranges from greenish blue to blue-green; the color usually is more intense in larger stones. This gemstone is mined mainly in Brazil, but also is found in Nigeria, Madagascar, Zambia, Pakistan, and Mozambique. 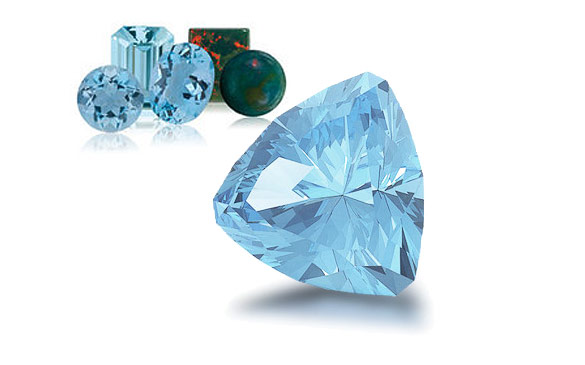 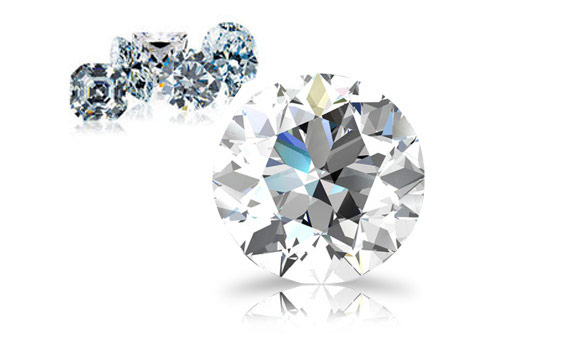 As the April birthstone, diamonds are the ideal gift for a loved one. And now you have more choices than ever. Get creative and give the ultimate gift of beauty: a fancy-color diamond. Fancy-color diamonds are natural, rare and truly exotic gem of the earth. Diamonds in hues of yellow, red, pink, blue, and green range in intensity from faint to vivid and generally the more saturated the color, the higher the value. In fact, diamonds sparkling with intense color are rare and may be priced higher than a colorless diamond of equal size. Because fancy-color diamonds are very desirable, color is sometimes introduced in a laboratory. These are correctly called color-treated diamonds. When purchasing a fancy-color diamond, the shopper should ask if any enhancements or treatments were used to improve its color and/or clarity

As the birthstone for May, the emerald, a symbol of rebirth, is believed to grant the owner foresight, good fortune, and youth. Emerald, derived from the word smaragdus, meaning green in Greek, was mined in Egypt as early as 330 B.C. Today, most of the world’s emeralds are mined in Colombia, Brazil, Afghanistan, and Zambia. The availability of high-quality emerald is limited; consequently, treatments to improve clarity are performed regularly. 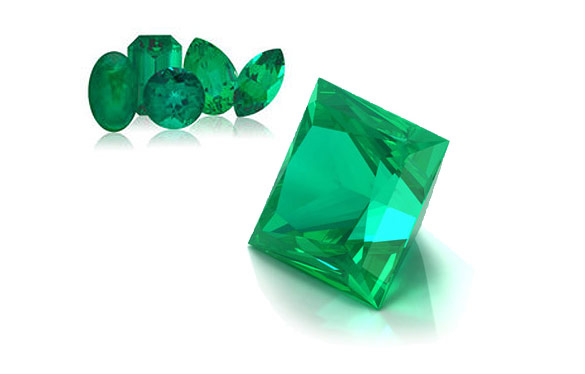 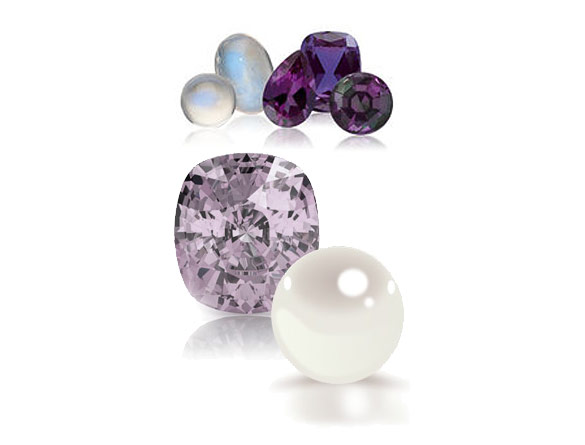 Historically, pearls have been used as an adornment for centuries. They were one of the favorite gem materials of the Roman Empire; later in Tudor England, the 1500s wereC known as the pearl age. Pearls are unique as they are the only gems from living sea creatures and require no faceting or polishing to reveal their natural beauty. In the early 1900s, the first successful commercial culturing of round saltwater pearls began. Since the 1920s, cultured pearls have almost completely replaced natural pearls in the market.

A relatively modern gem, Alexandrite, was first discovered in Russia in 1831 during the reign of its namesake, Czar Alexander II, and is an extremely rare chrysoberyl with chameleon-like qualities. Its color is a lovely green in both daylight and fluorescent light; it changes color to a purplish red in incandescent light. Due to its rarity, some jewelers stock synthetic versions of this enchanting gemstone. (Synthetic gemstones are man-made alternatives to the natural material, possessing the same physical, optical, and chemical properties as the natural gemstone.)

The third birthstone for June is the Moonstone. It was given its name by the Roman natural historian Pliny, who wrote that moonstone’s appearance altered with the phases of the moon — a belief that held until well after the sixteenth century. A phenomenal gemstone, moonstones show a floating play of light (called adularescence) and sometimes show either a multirayed star or a cat’s eye. Considered a sacred stone in India, moonstones often are displayed on a background of yellow (a sacred color) and are believed to encapsulate within the stone a spirit whose purpose is to bring good fortune. Part of the family of minerals called feldspar, moonstone occurs in many igneous and metamorphic rocks and comes in a variety of colors such as green, blue, peach, and champagne. The most prized moonstones are from Sri Lanka; India, Australia, the United States, Mayanmar, and Madagascar

There’s no better way to demonstrate your love than by giving a ruby in celebration of a July birthday. Rubies arouse the senses, stir the imagination, and are said to guarantee health, wisdom, wealth and success in love. Ruby is a variety of the gems species corundum. It is harder than any natural gemstone except diamond, which means a ruby is durable enough for everyday wear. Fine-quality ruby is extremely rare, and the color of the gem is most important to its value. The most prized color is a medium or medium dark vivid red or slightly purplish red. If the gem is too light or has too much purple or orange, it will be called a fancy-color sapphire. 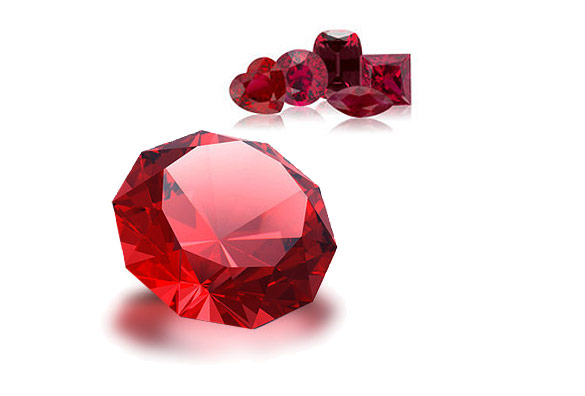 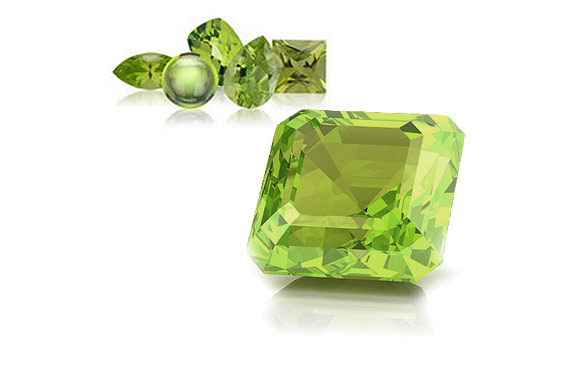 Peridot is said to host magical powers and healing properties to protect against nightmares and to bring the wearer power, influence, and a wonderful year. As peridot is a gemstone that forms deep inside the Earth and brought to the surface by volcanoes, in Hawaii, peridot symbolizes the tears of Pele, the goddess of fire and volcanoes. Today, most of the peridot supply comes from Arizona; other sources are China, Myanmar, and Pakistan. This gemstone comes in several color variations ranging from yellowish green to brown, but most consumers are attracted to the bright lime greens and olive greens. Peridot, in smaller sizes, often is used in beaded necklaces and bracelets.

Sapphire, the September birthstone, has been popular since the Middle Ages and, according to folklore, will protect your loved ones from envy and harm. Medieval clergy wore sapphires to symbolize heaven, while commoners thought the gem attracted heavenly blessings. Blue sapphires range from very light to very dark greenish or violetish blue, as well as various shades of pure blue. The most prized colors are a medium to medium dark blue or slightly violetish blue. Sapphire is a variety of the gem species corundum and occurs in all colors of the rainbow. Pink, purple, green, orange, or yellow corundum are known by their color (pink sapphire, green sapphire). Ruby is the red variety of corundum. 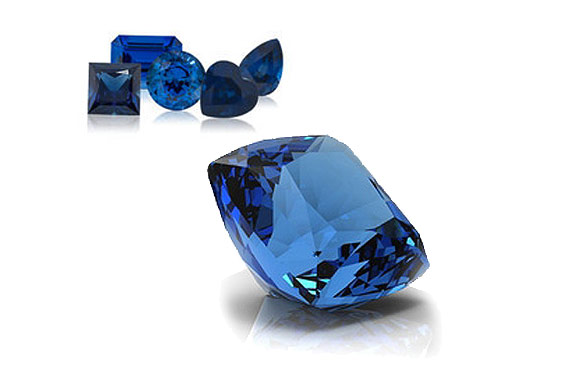 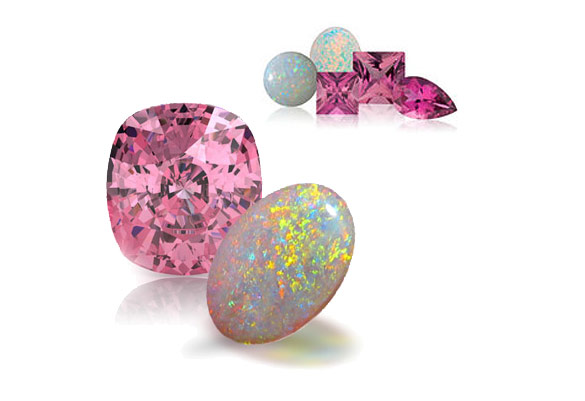 Tourmaline has become a favorite gemstone among jewelry designer, and gem collectors the world over. Since it is available in a wide variety of colors, it is ideally suited to almost anyone’s taste. Tourmaline also is known for displaying several colors in the same gemstone. These bi-color or tri-color gems are formed in many combinations; gemstones with clear color distinctions are highly prized. One multi-color variety is known as watermelon tourmaline, and features green, pink, and white colors bands; to resemble its namesake, the gemstone is cut into thin slices having a pink center, white ring, and green edge. Tourmaline is found in many localities including Brazil, Afghanistan, East Africa, and the USA.

The name opal derives from the Greek Opallos, meaning “to see a change (of color).” Opals range in color from milky white to black with flashes of yellow, orange, green, red, and blue. An opal’s beauty is the product of contrast between its color play and its background. Opal is a formation of non-crystalline silica gel that seeped into crevices in the sedimentary strata. Through time and nature’s heating and molding processes, the gel hardened into the form of opals. The opal is composed of particles closely packed in spherical arrangements. When packed together in a regular pattern, a three-dimensional array of spaces are created that give opal its radiance.

Topaz is a gemstone available in a rich rainbow of colors. Prized for several thousand years in antiquity, all yellow gems in antiquity were called topaz. Often confused with citrine quartz (yellow) and smoky quartz (brown), quartz and topaz are separate and unrelated mineral species. The most prized color of topaz is called Imperial topaz after the Russian Czars of the 1800s and features a magnificent orange body color with pinkish undertones. Topaz also comes in yellow, pink, purple, orange, and the many popular blue tones.

Citrine, the other birthstone for November is known as the “healing quartz”. This golden gemstone is said to support vitality and health while encouraging and guiding hope, energy and warmth within the wearer. Citrine can be found in a variety of shades ranging from pastel yellow to dark brownish orange. It is one of the most affordable of gemstones and plentiful in nature. Citrine is found most frequently in Brazil, Bolivia, and Spain. 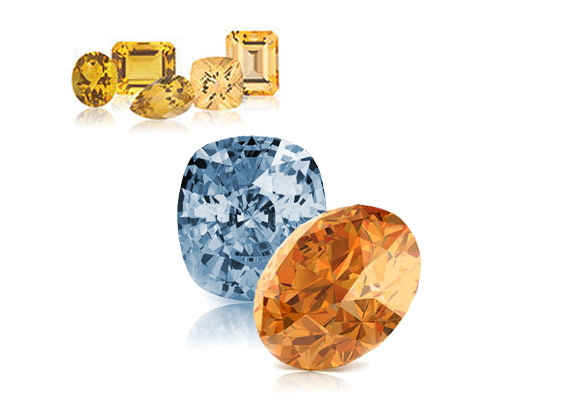 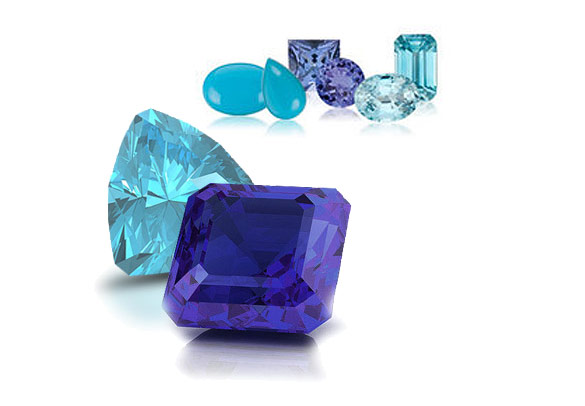 Discovered in the late 1960s in Tanzania, and found exclusively in this tiny area of the world, tanzanite exhibits a rich violet-blue color for which the gemstone is treasured; often it is heat-treated to achieve this color. Colors range from blue to purple, and tanzanites that are medium dark in tone, vivid in saturation, and slightly violet blue command premium prices. As tanzanite can be less expensive than sapphire, it often was purchased as an alternative. However, it has increased in popularity and now is valued more for its own beauty and brilliance than as a sapphire substitute.